Despite Improvement, Home Values Lag for Communities of Color

As home prices reach pre-recession levels, the value gap between communities of color and the typical American home remains pronounced, but the disparity is shrinking…

As home prices reach pre-recession levels, the value gap between communities of color and the typical American home remains pronounced, but the disparity is shrinking, according to a Zillow.com study.

These minority-led households are worth 16.2% and 10.2% less, respectively, than the average American residential property. The gap, however, has narrowed by about 4 percentage points from their widest points following the Great Recession.

“While this gap has been shrinking in recent years, the disparity is a glaring example of persistent inequities in wealth building and access to home equity across races in the U.S. housing market,” wrote Economist Treh Manhurtz for Zillow.

Communities of color suffered more than others during the Great Recession, and it has taken longer for this population to bounce back.

“Predatory loans were targeted and designed to take advantage of the most vulnerable communities. The ensuing wave of foreclosures hurt both Black/Latinx homeownership and home values disproportionately, and growth in these communities was relatively slow for years even after the nation as a whole began to recover,” Manhurtz said. “Year-over-year home value growth turned positive for U.S. homes in August 2012, but the racial gap in home values didn’t start to close for Black and Latinx homeowners until 2014.”

Manhurtz said he doesn’t expect a widening of the gap related to the current recession, adding that the same factors that widened the gap in the Great Recession are not surfacing this time.

“Thanks to rock bottom rates on the most secure mortgages, extended forbearance programs, and rising home prices, there are no signs of another widening of the gap coming this year. However, through these turbulent times, continued vigilance and targeted intervention by policymakers is crucial to keep the progress going for communities of color.” 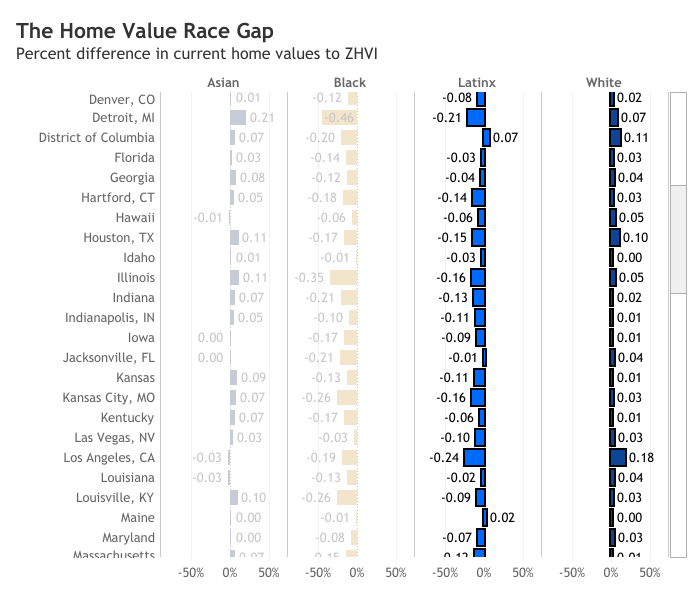